Happy New Year everyone! 2018 is here! How has everyone started their year? For us at Ik Chin, we started the year of 2018 with the spirit of giving. Based on the wishes of our previous trip to Batam in 2017, we wanted to let the lower income locals enjoy a good meal. Therefore, we once again landed on this island with a mission. Many of us who frequent to the Island in Riau would have been there for the shopping, massage and the amazing food. While we still managed to get some of those during the tour, this time, our main purpose was for charity. 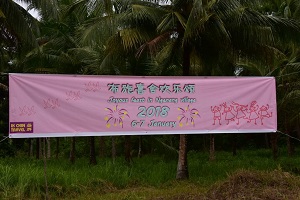 Our 2 days 1 night trip started straight on with our main event – a charity lunch with the locals in another of the Riau islands, Memory Island. In order to get there, we had to take another boat from a private harbour in Batam. The ride took about 30mins before reaching the harbour of Pulau Ngenang (the Indonesian name of the Island). There, the locals whom we have invited have gathered in the large field located next to their local primary school in song and dance. I for one did not expect to see such a set up for this event. Tables were set up by the locals where they sold some of their handmade handicrafts, snacks and drinks. Seats and a temporary shelter was set up for our arrival. We were each served 1 of their freshly cut coconuts as drinks. Such warm hospitality did not feel like we were the ones giving but on the receiving end instead. After some introduction and a dance performance by the local children, it was finally our turn. We have ordered 1300 packs of food to be given to the locals for lunch. These food was prepared by a local restaurant from the main island of Batam and shipped over. Besides that, we have also prepared 600 pails to be given to each family. In each pail contains daily necessities such as rice, sugar and snacks enough to provide the family for about 1 week. With the help of the village chiefs, coupons for the items were handed to the locals and they used them to exchange for food and the pails. Despite the hot weather and the lack of shelter, everyone of us worked tirelessly to give the food and the pails, powered by the smiles and laughter from the locals. The giving took us 3 hours and by then everyone’s faces were burning red from the sun.

We spent some time to tidy up the place while some of us joined them in their song and dance. Satisfied with our clean up work and seeing some of the villagers returning back to their homes, we took our leave by boat with the warm goodbyes and well wishes of the locals and village chief. The event took half a day and by the evening, we were comparing the new tans that we have all gotten. At night, most of us went for a well deserved body massage to prepare for another day of community work at a local temple before returning back to Singapore. Our theme of this trip was to create a good start to the New Year for the locals. What we gave was not much. A simple meal by Singaporean standards but it was enough to put smiles on their faces. By giving them a joyous feast to enjoy with their loved ones at the start of the year, it represents our best wishes for them to have a good year ahead with their friends and family. Though our contribution might only go as far as a few days, our efforts were recognised by the local government. Since our first visit in 2017, the local government has made efforts to improve the conditions of Memory Island. They have since created a walking path from the village to the harbour and also make the island cleaner. Apparently, even the smallest of contribution can make an impact. An initial count of the number of residents in Memory Island and the nearby islands were about 1600 which we were intending to cater to. However the recent counts during the coupon distribution amounted to about 1200. This was due to some of the residents staying in Batam for work. On the actual day, attendance however was lesser than 1000 with the absentees asking their family/friends to collect the food and pails on their behalf. We found that some of the locals from neighbouring islands could not join due to various reasons. They do not have the money to afford the boat ride while some others do not have decent clothing to wear. The locals of the island cluster around Memory Island are originally fishermen who live their lives at sea. They were then settled on to the land by the government who provided them with the homes. Unfortunately for us, we did not have the chance to visit their homes during the trip. Here, we would also like to thank everyone from our friends, tour members and their friends and family for the contributions to make this trip possible and be as successful as it was. Thank you for allowing the Joyous Feast event in Memory Island to come to fruition. Let’s all continue to sow the seeds of giving!

To all our readers, have you started giving for 2018?